The effect of screen time on children has been a topic of interest ever since the first television programs were screened. While most families happily rearranged their dinner habits back in 1941 to be able to make the most of this wonderful new world of information and entertainment, they were warned by educators, doctors and prophets of doom that the health, well-being and morals of humankind may suffer due to this new trend.

Fast forward almost eighty years, and our lives are filled with a – then unimaginable – array of screens and electronic devices. Fortunately, we are as creative and adventurous as ever – but statistics tell us that we are more obese, more depressed and less literate than our grandparents.

Suspicions are strong that our devices may have to take some of the blame for a decline in our general well-being, as well as for our rising youth mental illness statistics. Researchers haven’t been able to agree on this in the past, but some overseas and New Zealand studies now show that there are definitely reasons for concern.

Around the Globe - how much is too much?

From research conducted over the past two decades, we’ve learnt that children who spend excessive time watching TV when they are very young, are most at risk of developing emotional, psychological and physical health troubles by the time they entered their teens. The time spent passively watching screens rather than interacting with the outside world is thought to cause them to miss out on key aspects of brain development.

A more recent study conducted by researchers from Calgary University showed that children between the ages of 2 and 5 watched on average between 1.5 and 3.5 hours of TV, and those who watched the most fell behind in language, communication, motor skills, and/or socio-emotional health development.

Even more concerning, a research project at San Diego State University, involving children between the ages of 2 and 17, showed a link between as little as one hour screen time per day and the development of mental illness - specifically anxiety disorder and depression. 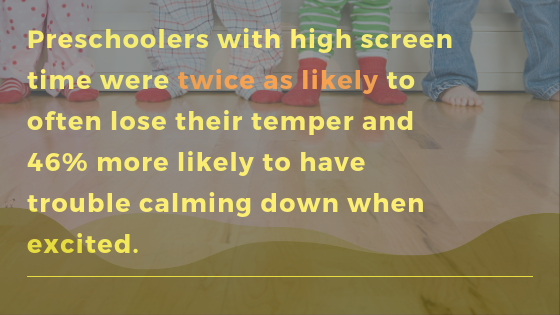 How do young New Zealanders fare?

The first study looking at children’s screen time usage based on New Zealand-only data, Effects of screen time on preschool health and development, analysed screen-time data for more than 5,000 pre-schoolers from the Growing Up in New Zealand study. The researchers tracked trends in the duration and type of screen usage at 24 months, 45 months and 54 months of age. Some of the findings from this study showed that time spent on screens increases with preschool children's age.

The largest increases are seen with portable electronic media (ie computers, tablets, smartphones and gaming devices). On average preschool children spend about 1.5 hours daily using screens at 2 years of age, increasing to two hours per day when children were 3.75 years of age.

At each time point those who met the Ministry of Health’s guidelines for screen time were consistently found to be of NZ European ethnicity, have less socioeconomic deprivation, household screen time rules were enforced and fewer televisions were present in the household. The study also found that children who exceeded the one hour per day screen time guideline at the age of 2 were more likely to be obese, be sick and pay visits to the doctor more often, have lower physical motor skills, and had hyperactivity problems more often at 4.5 years of age.
Ministry of Health guidelines

The Ministry of Health’s guidelines for an active lifestyle for children and young persons recommend that children younger than 2 have no sedentary screen time. Screen time for children aged 2 to 5 years should be less than one hour each day. The good news is that the findings of the New Zealand study provide the first evidence that adhering to current screen time guidelines is associated with better health outcomes in New Zealand children.

These guidelines are loosely in line with the recommendations published by the American Academy of Pediatrics, which state that screen media other than video chatting should be avoided for children younger than 18 months. If children between 18 and 24 months are introduced to digital media, their parents should choose high-quality programming and watch alongside them. The AAP also says that children between the ages of 2 and 5 should be limited to 1 hour per day of high-quality programs, viewed together with their parents to help them understand what they are seeing and applying it to the world around them.

Is there a place for screens in Early Childhood centres?

Selecting screen time media and activities should be done with careful consideration. There should be no need for devices and screens as rewards or babysitters in early childhood centres. Many ECE centres have made the choice to stay screen-free zones, a policy often strongly supported by their parents.

However, some centres are using devices to enhance learning. Moving on from documenting the child's learning, these centres use devices as learning tools for discovery, research, creating and connecting alongside their journey of learning through free play. Sharing their philosophy with their parent community and making caregivers aware of the time the child spent on devices while attending their centre, and the nature of the device used, may help families plan their screen time at home more mindfully.

The sobering statistics sadly don’t distinguish between time spent using devices for mere entertainment and time actually using them as a learning tool. The recommendations from authorities and professionals also sometimes seem to focus solely on the role of parents, seemingly forgetting the time that young children may spend in education and care, and that some of their screen time may involve amazing opportunities to learn.

Technology plays a huge role in our modern lives and is here to stay. We are in urgent need of all kinds of tech specialists and software developers, and the industry promises a bright future for young people who can step up to code and problem solve our future.

Screen time in the early years is not all bad news, but there is a need to educate and support parents and caregivers in limiting and mentoring children’s screen usage and helping them to teach healthy attitudes towards devices. Only then the young generation can safely reap the benefits of the electronic era.