An infant lies on the floor, gently rocking from side to side until she eventually succeeds in rolling over onto her tummy. Nearby, another baby is wriggling on his back, slowly making his way towards a toy until he can stretch out and reach to pick it up.

A third little one is sitting up with a straight back and perfect posture, investigating an object in her hand. A caregiver is busy nearby - she keeps an eye on the infants but does not interfere with their play to assist or correct them. 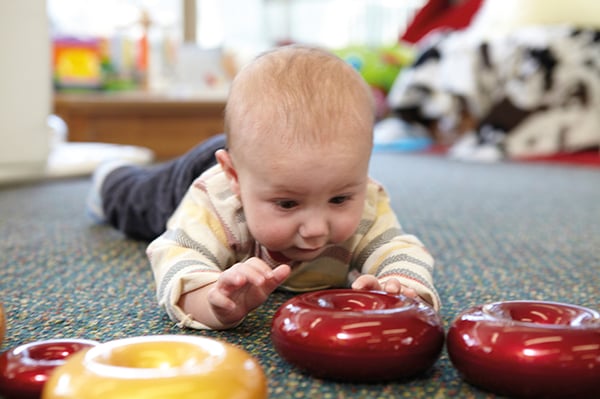 An observer may make the mistake to think that she must be rushing to get some household chores done while her young charges are settled and happily playing, but the truth is actually that the babies are contented and not considered in need of entertainment.

There are more babies - some seemingly peacefully napping, some crawling or standing while exploring the environment, while another caregiver is quietly and lovingly talking to an infant as she is changing his nappy. She can be heard asking the infant in a gentle voice to lift his legs and help her in her task. There are no infant seats or walkers visible in the room, and no babies propped up to sit while they cannot do it by themselves.

Who was Emmi Pikler?

The year was 1946; the place a large villa known as Lóczy in the city of Budapest, Hungary. Emmi Pikler, a paediatrician of Jewish descent, had been asked by the city officials to set up a residential nursery. It would be an orphanage for infants who lost their parents during World War II. Dr Pikler took on the challenge, running the institution on the ideas that she had formed and shared with parents while working in her private practice between 1935 and 1945.

It did not take long for Lóczy to become a place like no one has seen before. Dr Pikler trained her staff to respect each baby as a person and to address them respectfully. Involving them in every part of their care by asking for their permission and co-operation.

At Lóczy, nothing was done “to” a baby - it was done “with” the little one instead. In stark contrast to many orphanages at the time, the children living at the institution were not left in cots for long hours but allowed to play and explore freely. They weren't rushed through care routines but the caregivers used those times to communicate and bond with the infants.

Alongside the orphanage, a training institute was established. Dr Pikler continued to research natural child development at Lóczy and teaching her ideas in Budapest and around the world until her death in 1984. Amongst those who were influenced by Emmi Pikler’s approach, one of the best-known in the English speaking world was Magda Gerber. Gerber studied under Dr Pikler in her home country before emigrating to the United States, where she went on to teach the approach and established the Resources For Infant Educarers (RIE) movement.

Dr Pikler’s teachings can be distilled into two main ideas. According to The Pikler Collection, she firmly believed in the importance of establishing respectful and peaceful relationships with infants. She also deemed that the development of motor abilities happens best when the child is given complete freedom of movement and allowed to be in charge to pace their own physical efforts.

Pikler taught caregivers a planned and respectful way to interact with children, inviting the child to participate and involving them in their own care activities - and in the process genuinely making contact on an interpersonal level. This thoughtful approach has a profound influence on the child’s development of their identity and sense of self-worth.

During caregiving activities such as feeding, washing, nappy changing and dressing, the caregiver and child have the opportunity to spend special time together. Dr Pikler taught her students to use this time to show tender care and to give the child their full attention. Creating a calm and unhurried atmosphere allows the child to relax and feel at peace with the world and themselves.

The caregiver lets the child know what they intend to do and give them a chance to respond.

Dorothy Marlen writes on the website Teach Early Years about the opportunity she had to observe caregivers at the Pikler Institute, “It was a profound experience to see the level of trust, enjoyment and gentle cooperation that is possible between carer and child”.   Building a trusting and caring relationship creates a space where the child feels safe, and their abilities are allowed to unfold naturally.

Parentingworx website, when discussing the Pikler Approach, points out that babies who are given a nurturing environment and freedom to explore, are quite able to entertain themselves. Our efforts to help them play may be interfering with their discoveries, while their efforts bring them independence, confidence and good self-esteem.

Pikler regarded complete freedom of movement an essential part of children’s healthy development. A baby who is restricted, propped up or tied into a seat is a trapped baby, one who is unable to discover the full range of body movements they are capable of.

She believed that they should be allowed the time and space to develop their physical capabilities, to experiment and to overcome difficulties. She also found that children who were “supported” to learn sitting, standing and walking before they are developmentally ready, tend to develop less strongly and gracefully in their posture and movements, and are more accident and injury prone.

For Pikler, the ultimate correct thing to do was letting the infant unfold in their development without interference.

Benefits of the Pikler approach

Marlen says that Dr Pikler recognised the key to assuring children’s physical and mental health is through creating a secure attachment. One of the best testimonies of the importance of her work is embodied in a study following a group of children who spent their early years at Lóczy.

The research funded by the World Health Organisation showed that they went on to be well-adapted and successful, showing no signs of delinquency and poor outcomes in adult life as was usually observed in children who spent their early years in an institution.

In her Master's degree research at Victoria University, Wellington, Toni Christie examined teaching practices inspired by the Pikler approach and RIE philosophy. Christie describes her observations of how a system of designated primary caregivers worked with all teachers in the centre. A learning environment where teachers share reciprocal relationships with all the children but a deeper level of understanding with the primary caregivers.

She found that teachers were able, through peaceful observation, to interpret infants’ body language, cues and gestures. Caregivers used body language and verbal cues as an invitation to engage and took the time to explain to the children what they were doing. Teachers were mindful of the child’s pace and responded by slowing their interactions. 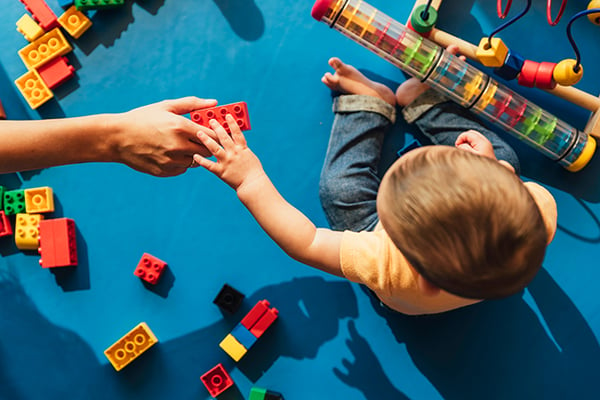 Christie also observed how the teachers in the case study centre accommodated the discrepancies between the centre’s adopted philosophies and families’ care practices at home. Some of the infants were used to being propped up to sit, or restrained in a high chair.

Teachers would respond with flexibility by sitting up children who were used to being propped up when they became frustrated at lying down. Respect for the child, according to Christie, was the determining factor in these cases. The children shared their time between two very different environments, and their comfort level, as well as their family background, had to be considered.

Christie’s research highlighted the difference between adoption and adaptation of a philosophy - in this case, free movement. Adoption would require a centre to adhere strictly to the prescribed principles.

Adaptation, on the other hand, allowed the study case centre to weave ideas from the approach into the cultural context and curriculum framework of the centre. A flexible approach like this would allow a centre to preserve its unique character and align with the values and expectations of their community.